ADB DAY! MOST MEMORABLE BIKES OF THE 1970s | LIFESTYLE

It’s Tuesday and that means it’s ADB day! While we love all things side-by-side, we also love our dirtbikes and there is none better at producing dirtbike media than ADB. So we hit them up for their favourite web article and they unanimously decided it had to be an article they produced on the best dirtbikes from the 1970s. Here’s a snapshot of that feature if you don’t want to read the whole thing:

We’ll start with the ’70s because that’s when the magazine started and also because it was a time of great change and experimentation. Nobody knew for sure what would or wouldn’t work and many ideas were tried by both the factories and aftermarket accessory manufacturers. Some worked and some didn’t, some lasted and some disappeared and, looking back, that was probably the best thing about some of the ideas … they disappeared. 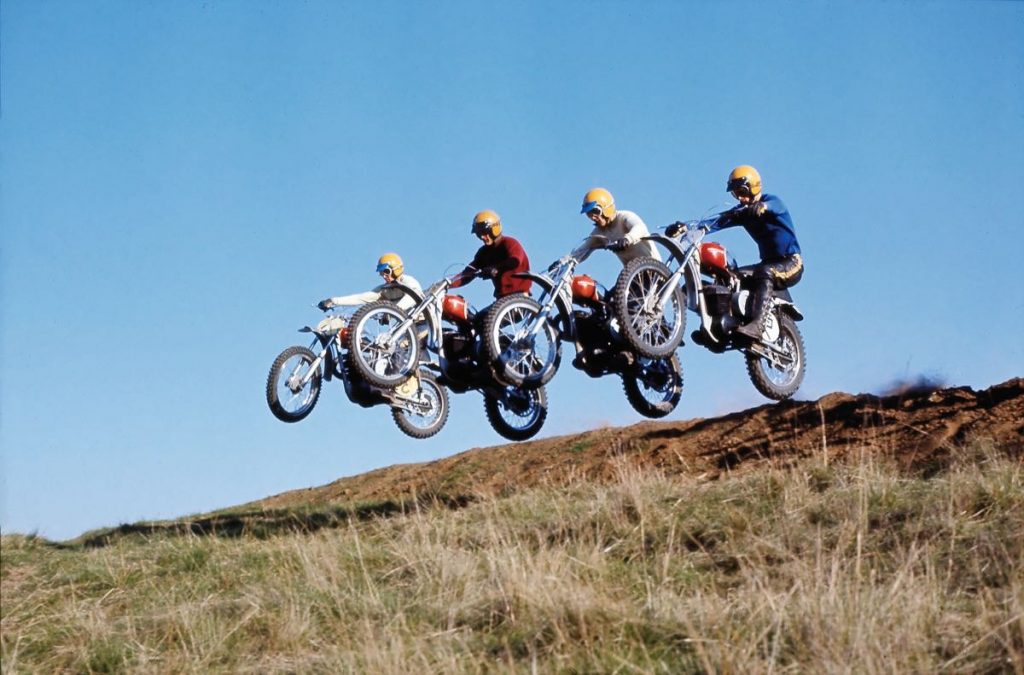 Purpose-built dirtbikes were becoming easier to get as the Japanese factories fired up. Most dirtbikes available in the 1960s had been expensive, not widely available and/or not very reliable.

So what bikes do we find the most memorable? Read on and see if you agree. If you don’t we’ll happily discuss it with any of you over a beer and a campfire somewhere, sometime. Your shout, naturally. 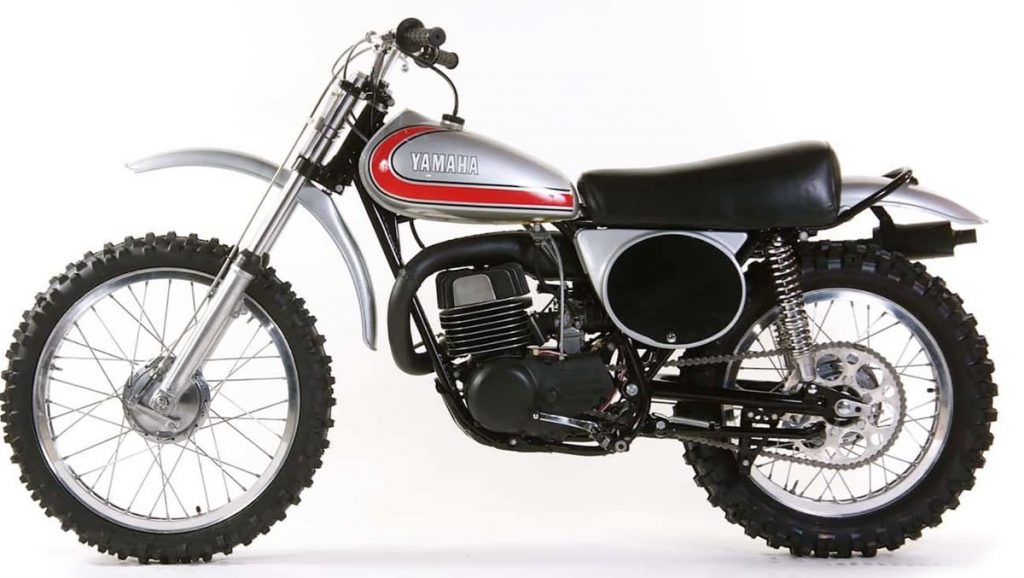 Noted as the first proper production motocrosser, it was available in Australia as early as 1971 for $975. Previous “motocross” bikes were really just kitted trailbikes fitted with a few “factory” parts like a different exhaust. Most people simply made do with a trailbike that they kitted up themselves as the budget allowed. The DT2MX came standard with a reed valve, CDI ignition and Autolube. Many riders removed the latter and ran pre-mix. The 125cc model was the AT2MX and the RT2MX was a 360. 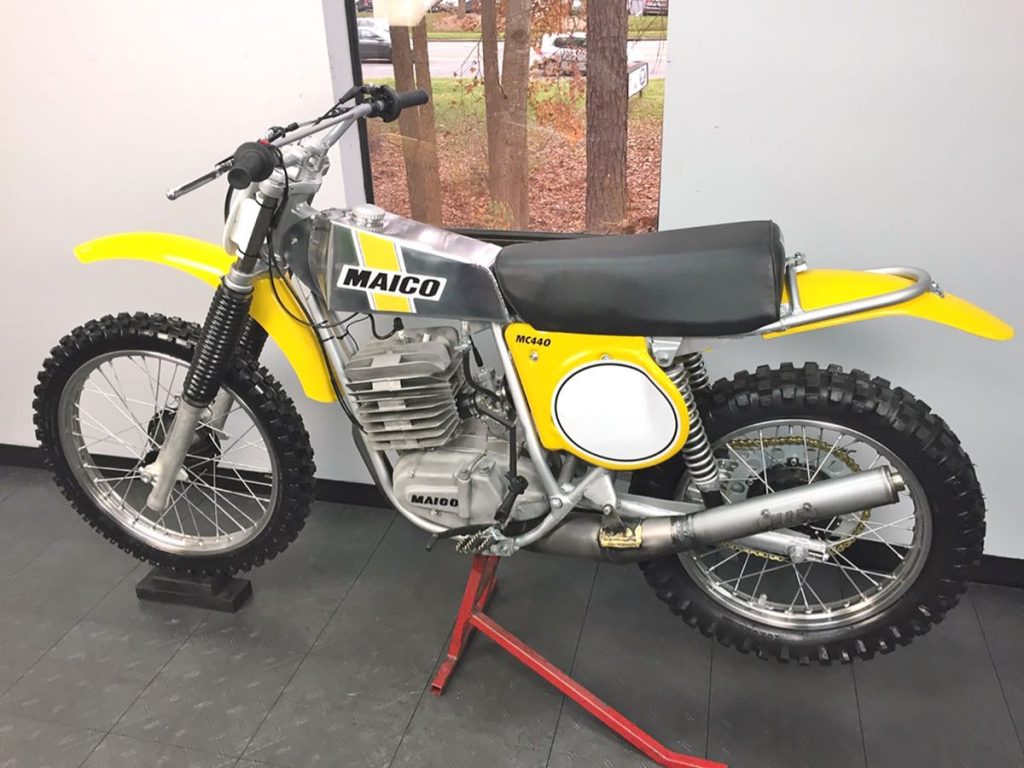 This particular beast springs to mind because it was the one that started the long-travel revolution. Making a bike fast or powerful was not too hard, but getting that power to the ground on a rough track was the problem.

Being a small factory, Maico had a certain production flexibility that allowed quick changes and it was partway through 1974 that the Germans moved the shock absorbers forward to increase rear wheel travel, hence the nickname “seventy four and a half” Maico. 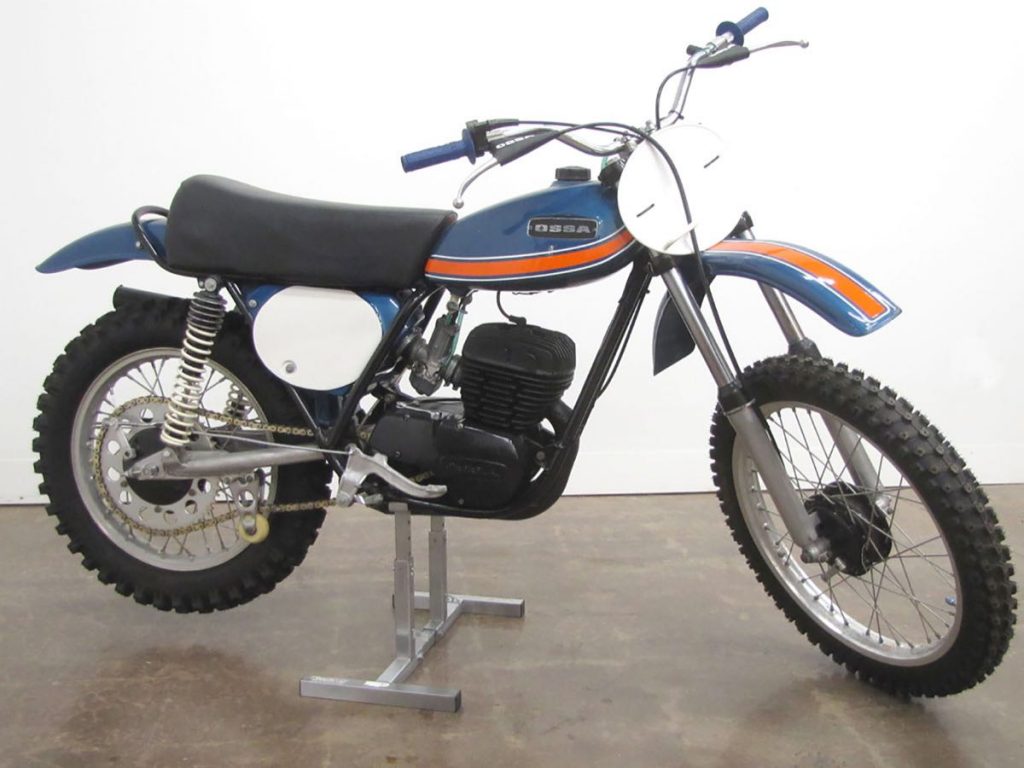 One of the early targets in the Jenny Craig game was 100kg. The Ossa Phantom with one gallon of fuel weighed in at 96.16kg, according to a Trail and Track magazine test.

The Spanish industry failed to set the world on fire despite producing some fine bikes, and Ossa went the way of Bultaco and Montesa. It’s a shame as the Phantom, as well as being a true lightweight, was one of the best-looking bikes to grace a startline. 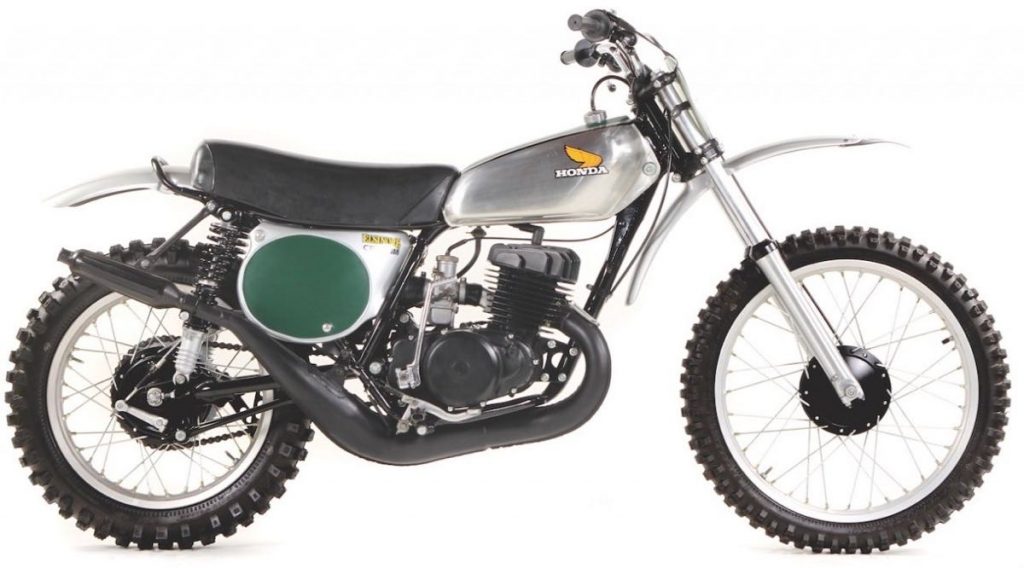 With this reluctant blessing the whole of Honda got behind the project, with the CR250 debuting in 1972 quickly followed by the CR125. After a few races the wins started coming and the green light was given for production. The public first got a chance to buy the 250 in 1973 and the 125 in 1974. The name Elsinore was taken from a race in the US that featured strongly in the 1971 movie On Any Sunday and was itself a catalyst for the ’70s dirtbike boom.

The Elsinore was the right bike at the right time and the right price. It was not without its faults, a season of hard use could produce gearbox problems, for example, but as an all-around package it was ahead of all the others. 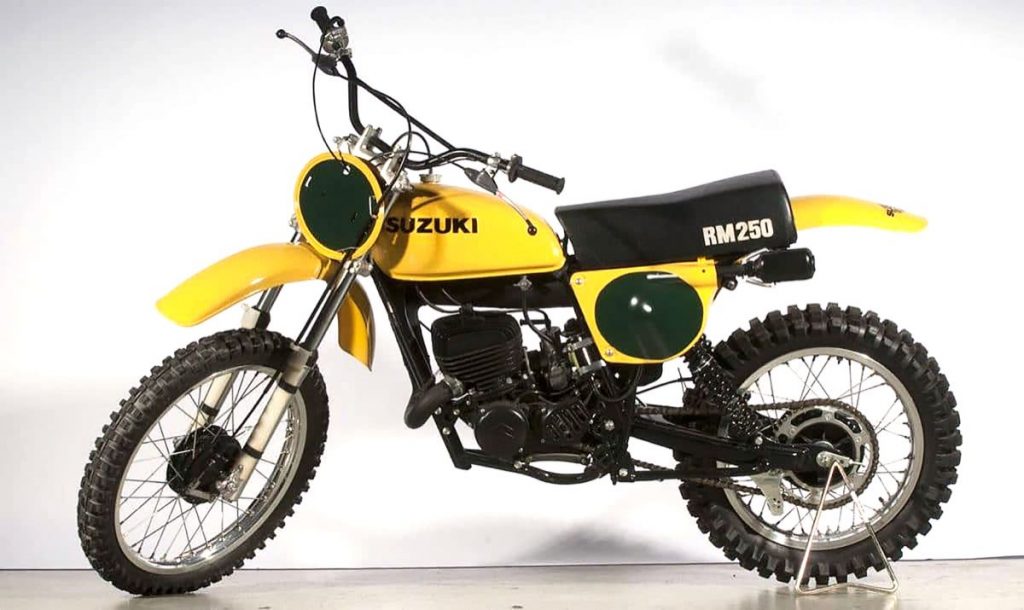 The RM was Suzuki’s leap into the world of long travel pioneered by Maico and it went with 45-degree angled gas/oil shocks mounted upside down. This gave 214mm of travel to go with the 220mm at the pointy end and a very neat looking package it presented.

Combined with improved ports that were so wide that they required two bridges and Suzuki’s crankcase reed induction, the RM was a big leap forward and so were the B models. 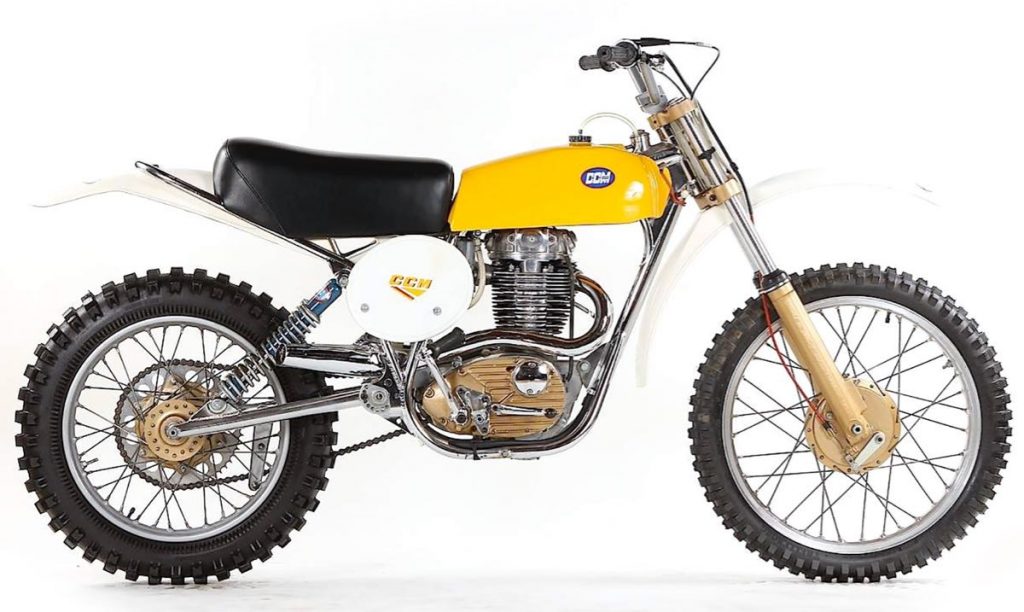 CCMs were built in England and owed their existence to Alan Clews who, when BSA announced the closure of its competition department in 1971, bought a dozen frames and other parts for 750 pounds sterling.

He built the bikes for sale while keeping one for himself and CCM grew to carry the thumper flag in MX for the remainder of the century – until the Yamaha YZ400F came along in 1997. Suspension was improved, electronic ignition added. 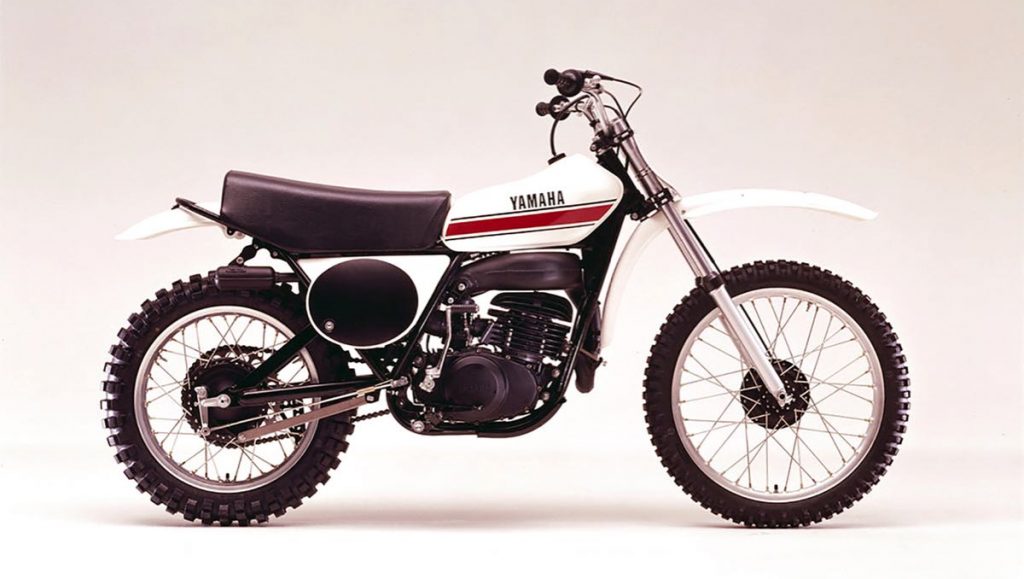 Yamaha entered the long-travel race from an entirely different direction with its Monocross system, often mistakenly called “cantilever” here in Australia. The design was the brainchild of Belgian inventor Lucien Tilkins and, after proving its worth on Hakan Andersson’s 250cc title-winner in 1973, got further development to emerge for the buying public in 1975.

The racing prototypes puzzled spectators as they seemed to have no rear suspension, with the shock hidden in the frame backbone and pivoting near the steering head. This did put weight up a little high so riders had to adapt, but the design worked. 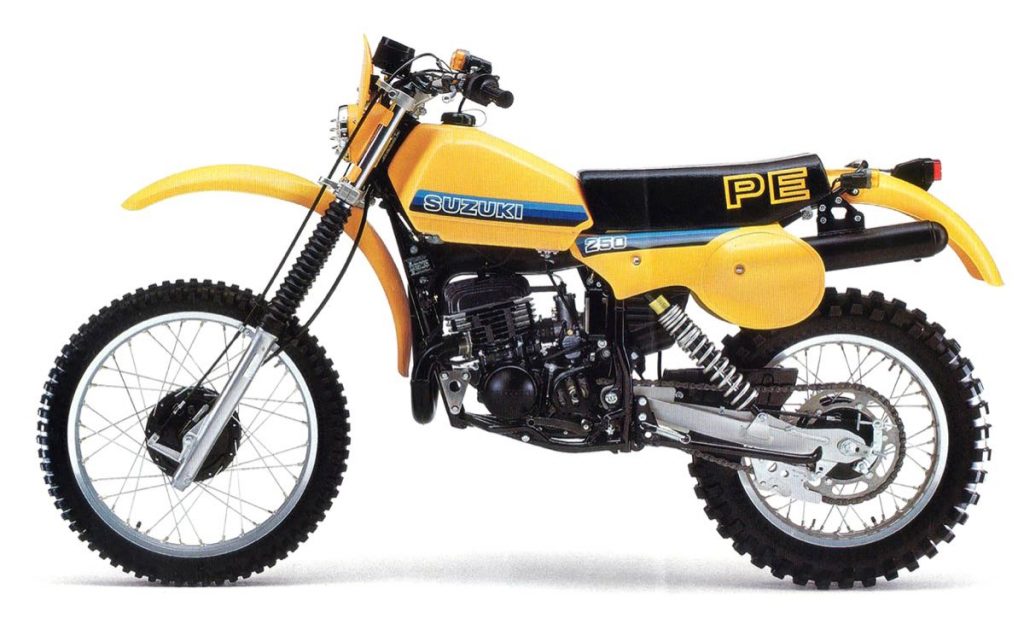 Yamaha developed IT400C in 1976, closely followed by Suzuki with the PE250B, based on its RM-B. Before these two bikes, those of us who chose to ride the manly sport of enduro had to have a friendly bank manager to afford a European mount as well as a good degree of mechanical ability and free time to keep said machinery in a mobile condition. The IT400C was a proper factory-built enduro bike that was ready to go, straight off the showroom floor. 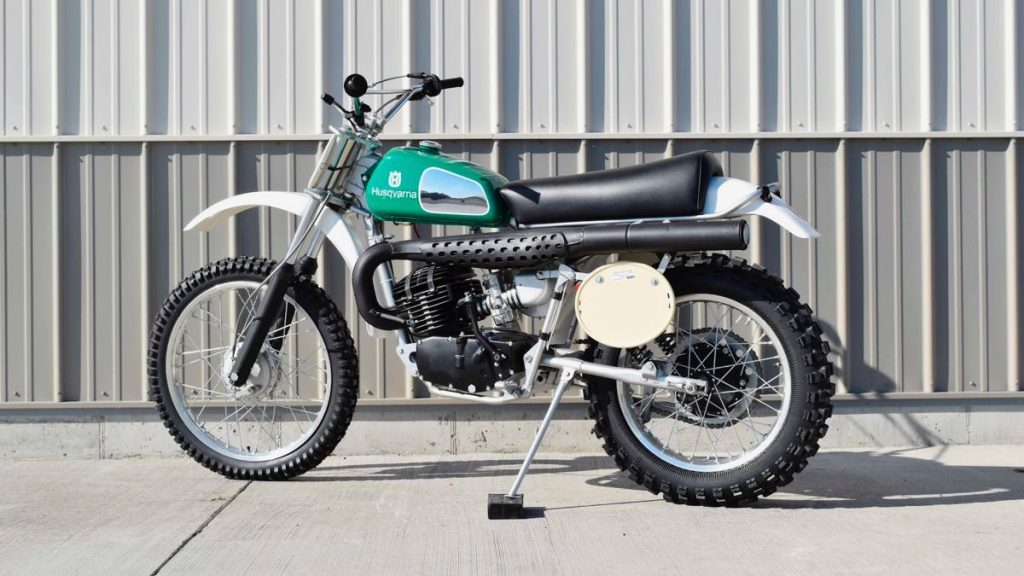 Husqvarna explored the automatic gearbox concept, an idea it took to the market in 1976 and persevered with until 1988. The idea came from the terms of a Swedish Army tender which required a motorcycle that was easy for non-motorcycling troops to operate.

The four-speed gearbox did need more maintenance on its clutch packs than a manual one but improvements came with time, and the last model produced was a three-speed. The Auto began life as a 360 and finished as a 430, having also gained liquid cooling, a front disc and monoshock suspension. 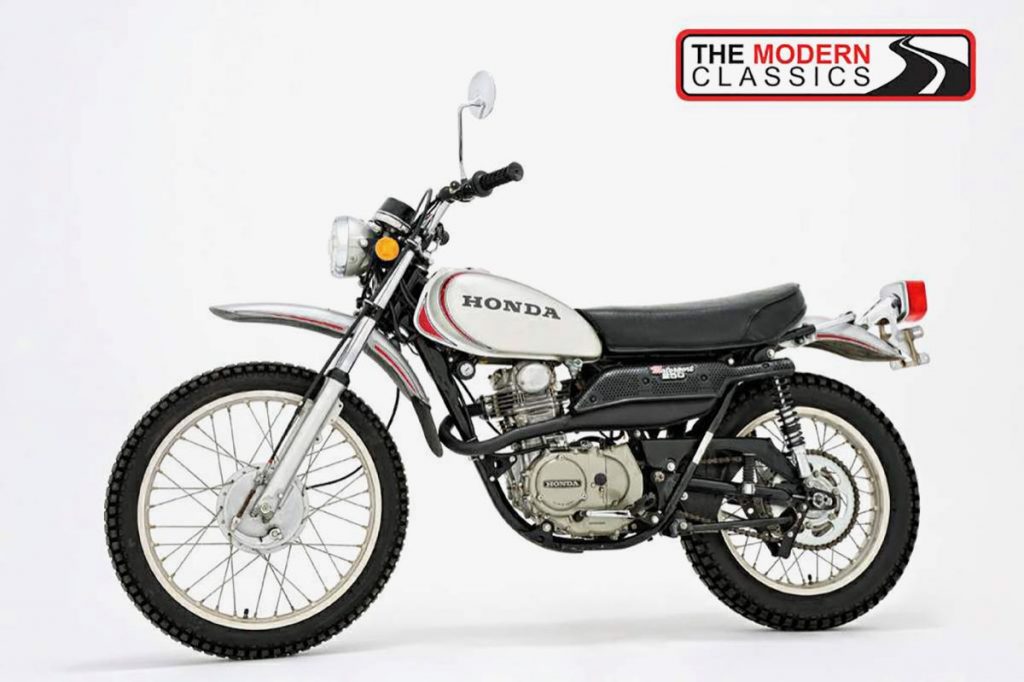 Released in 1972 as Honda’s answer to the growing demand for trailbikes, the Motosport was an instantly recognisable bike due to its silver paint with contrasting maroon stripe on the tank. The SOHC, four-valve engine put out reasonable power by the standards of the day but, as the competing brands were all producing “light” two-strokes, the XL was sometimes referred to as the “lead sled”. 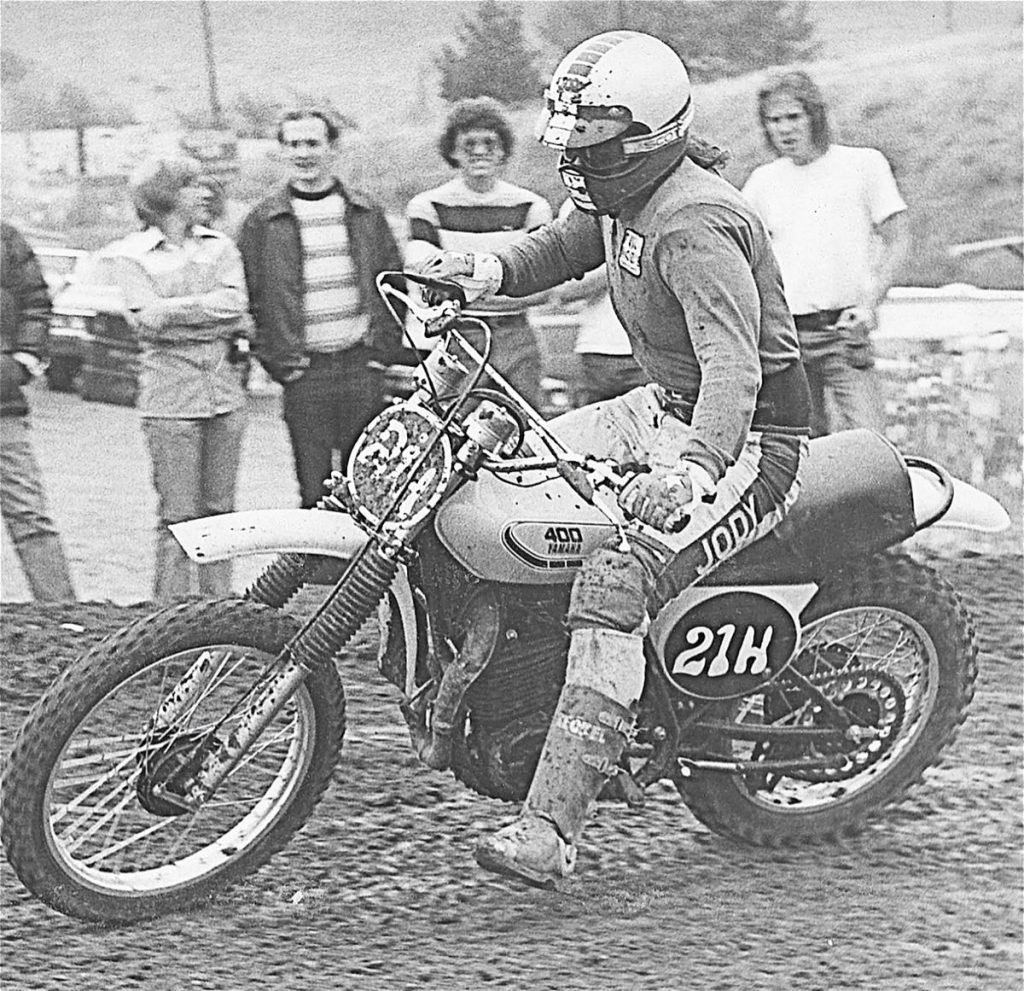 Yamaha, like Maico, had a “half” version with its air-forked 125X. It was nicknamed the “speedo/tacho” model due to the high-pressure air canisters on top of the fork legs. The legs themselves were low-pressure chambers with the high-pressure chambers to top, separated by a floating piston. The air pressure in the lower chamber was to hold the fork at the proper ride height (travel would stiffen as the air was compressed).

As the fork moved through its stroke, the air pressure in the legs pushed the floating pistons upward against the higher pressure inside the canister, increasing volume. The goal was to have plush forks for small- to mid-sized bumps and additional bottoming resistance but the valving was atrocious and they tended to top out on rebound.

The market wasn’t quite ready to trust a front-end with no coil springs either, and a common question was “what happens if it springs a leak?” Yamaha returned to conventional forks for 1977 but that wasn’t the end of the matter, with Husqvarna and KTM persisting with WP air forks at the moment after another recent mass withdrawal by Japan.